The festival runs from 6th to 8th June 2014.  The wonderful and dynamic Merry Hell open the Festival on Friday night so we look forward to a lively set.  On Saturday night we welcome Ciaran Algar and Gregg Russell, the BBC Young Folk Awards winners 2013 and BBC best newcomers to Folk 2014.  They are a magnificent pair  and have wowed audiences all around the country for the past year.  One Hand Clapping (Tim and Chris) close our festival on Sunday night.  They have already given us a memorable night at one of our fundraisers and we look forward to more of the same.

Details about all the acts are now in the Free Festival 2014 section.

Tickets are now on sale for the Houghton Weavers Fundraiser. This Bolton-based folk band formed in 1975 with a repertoire that draws heavily on Lancashire tradition and dialect.   Their catalogue includes "Howfen Wakes", "Alive and Kicking", "Lancashire Folk" and "Sit Thi Deawn".  You can be assured of a great night's entertainment.  As this is the last concert before the Festival, on 6th, 7th and 8th June 2014, we would welcome your support.

Another great night of live music was enjoyed by all.

Mervyn opened the show with his musical lyrics and top notch guitar work.

Then came Queen Jan who lived up to her name with her dynamic and musically inventive set, featuring the bodhran, guitar and ukulele.  She radiates power and confidence and good humour, and we always enjoy her performance.

One Hand Clapping finished the evening with a terrific set which alternated between high energy and soulful melodic songs.  Tim and Chris are a great duo and complement each other brilliantly with fiddle and guitar.  They were on great form and obviously enjoyed themselves.  This enjoyment was infectious and had us all dancing by the end of the evening.

Thanks to Mervyn for the sound which was brilliant as always, to Ken the MC, to those who donated raffle prizes and helped to sell tickets, and to you the audience for making the night a great success.  Let's hope that the Houghton Weavers concert on April 18th is just as good!

We would be delighted if you could support our next fundraiser for the Coppull Weekend of Folk Music, 6-9 June 2014

We welcome the wonderful ONE HAND CLAPPING 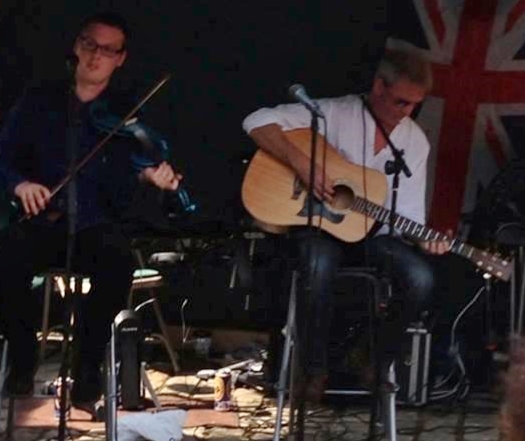 supported  by the Amazing Jan Hough,

and our multi-talented Ken Scalley

Season's Greetings to all our friends.

The next singaround is on Wednesday 8th January 2014.

Diary dates - February 21st, Fundraiser with old friends "One hand clapping" and supporting artists.  £6 on the door, £5 before.

Another great night of music making, thanks to all who helped - 8 November 2013.

Coppull Folk’s fundraiser was a wonderful night of live music.  Talented regulars Ken, Jim, Steve,  and Mervyn did us proud with their melodic sets .   Bryn provided some brilliant guitar accompaniment to Steve and Jim, and a few people even remarked that the main guests Gary and Vera had a very hard act to follow!  However Gary and Vera got into their stride with their Lanky jokes, stories and songs and had us all laughing for most of the night.  Thanks to all who performed, to Mervyn who did an excellent job with the sound, and to you the audience who came from near and far to support promoting live music, and, the next Folk Festival  at the Alison Arms in June 2014.

The stage is made, the tent is up, the chairs are in place, the wind blows and its raining!! Thanks to all 8 who turned up to help and to Phil for organising us all. We're all set for brilliant weekend of music and craic. See you tomorrow night.

Rick Jones opened our festival and delivered a great performance across many musical genres.  He had the crowd singing along and getting into the festival mood. Well done Rick.

Merry Hell delivered a brilliant, dynamic and exhilarating set with old favourites interspersed by tracks from their new album. Jon Brindley joined them for a few songs and added to their sound with his brilliant fiddle playing. We are so proud they made it to the Alison. They were in top form. The pub and tent were packed and the atmosphere was wonderful. The after concert session was also fun and went on late into the night.

Ken Scalley delivered an excellent set of Lancashire and Irish songs. As usual he got the crowd going and we knew we were in for a great day of music.

The Wigan Ukelele Band entertained us for an hour with a mixture of songs and tunes from their extensive repertoire. We have never had 15 people with their Ukeleles on stage before, fronted by Kim who used all of her percussion instruments and danced most energetically to the music. It was a musical treat.

Saturday night kicked off with the dynamic Jan Hough whose powerful and moving performances would have been worthy of a Wembley Stage. What a powerful and authorative performance!

She was followed by Anthony John Clarke and friends (Elizabeth on keyboards and Steve on the bodhran).   AJ immediately engaged the audience with his witty dialogue and reflective songs. The audience were instructed to sing choruses louder and louder and responded every time!! We even had to dance during one song!!  He had us folkies under his charming spell.  AJ always delivers but this one was very special. He and Jan even hung around for an informal session late into the night. In fact there were 2 late night sessions going on simultaneously. Although the wind blew hard and the tents swayed up and down to the music, this was another night to remember with affection. Isn't live music great?

Sunday started off with the popular Open Mic Session. There was a wealth of talent - all equally good. We had over 3 hours of contributions - an excellent concert in itself. Bridie playing her bodhran was the highlight for me. Up Northern Ireland!

Phil started the final concert with a few thought provoking songs which were well received.

Then Peter Southworth and his Strawdogs (Barry and Ken and later Chris), blew us away with a lively, confident and very enjoyable set.

The headline act - Steve Tilston, was class. His guitar playing is brilliant. He made playing a guitar look so easy with his finger picking styles, rifs and multiple chord changes up and down the frets. His guitar sound was like listening to a 3 piece band, and there was just him! Coupled with that were the melodic and thought provoking lyrics of his own songs delivered to perfection. Yes Steve you are one of the best singer/songwriter/ guitarists around. Tony Gibbons (another ace guitarist) joined Steve in his final song "Slip Jigs and Reels" (which is one of my favourites). This finale was a fitting end to our 5 successful concerts .

We had a great session in the bar afterwards, sharing music with our friends from Wales, Fleetwood and Chester. There was a lovely atmosphere and a sense of enjoyment, achievement and friendship, and relief that the festival was such a success and that the tent did not blow down, (even though the wind tried very hard during AJ's concert on Saturday night).

Thanks to Bill and Leslie who worked so hard to produce that excellent sound that enabled all the artists to sound their best. Thanks to Mavis and Ron and Dave, who worked even harder ALL weekend to well after 3 am, to provide us with the pub venue and refreshments. Thanks to Phil and the crew for organising it all to happen. Lastly thanks to you the audience who supported us and made the Festival possibly the best ever.

The big tent has now been taken down, the happy campers have all left, and it's definitely all over. Thanks to Mavis, Ron, Neil, Kevin, King Ken and Phil for helping me to clear up today!! The weather stayed fine and like all weekend it was a slick operation. We now can look forward to the NEXT FESTIVAL. See you all there.

COPPULL FOLK WELCOME YOU TO THEIR FREE FOLK MUSIC FESTIVAL

(See festival section for information about the Artists)

9.00 pm       Steve Tilston - one of the finest songwriters and guitarists in the country  and English folk Legend

Pub Sessions and Singarounds until late

Camping and  showers available £5 per pitch per night

Although the audience was not at the usual full capacity, they were distinguished, most of them performers in their own right, and they deserved the quality sets that our guests produced last night.  What a night of talent!!   Jan Hough was brilliant, so musical, so confident and highly entertaining.  This was her first time to one of our gigs and it won’t be the last.  How could anyone follow her??  Then up stepped A.D. Cooke who performed all her own songs, with feeling and just as much confidence.   What a talented lady?  She was a creditable second act who had the audience in her grasp from the word go.  There was little to choose between them - they were SUPBERB.   Both these talented ladies have the one thing that all singers need and that is clear diction.  We heard every word, which is how it should be but not always the case.  We even had a few spot guest acts from the wonderful Chonkinfeckcle.    Turnpike came on next with a completely different music genre but equally as good.  Their togetherness with musical harmonies and excellent musicianship produce a sweet, relaxing and soulful sound that grows on you as their set progresses.  We had sing-alongs, own penned tunes and friendly banter along the way – all carefully done to produce yet another excellent set.   A big thanks must go to Mervyn who did such a wonderful job on the sound and to all  the Coppull Folk who helped to organise the event.  We are indebted to all the performers and to you the audience for helping us to make the last musical evening before the festival such an artistic success.    We look forward to seeing you all at the FREE festival  from 14-16 June at the Alison Arms.