Anthony John Clarke assisted by Elizabeth Van de Waal treated us to a very special evening of song and craic, on Friday 17 February at the Unity Club, Standish.  His writing and performing talents are outstanding.  His delivery is very entertaining and we all enjoyed yet another wonderful night of live music.  We were even treated to a special guest - Richard Thompson, who joined in the last two songs with wonderful guitar solos.  Thank you Anthony John and Elizabeth and thanks as well to our local singers, Ken, Mervyn and Phil who provided the supporting act.   As always they were a joy to listen to.  Thanks must also to to Seth who as always worked hard to provide the sound system.  Thanks to the Coppull Folk team who worked so hard behind the scenes to get the show on the road.  Lastly, thanks to the wonderful audience who supported the gig.  Any profits from this will go towards running our "Free Weekend of Music 8-10 June 2012, at the Alison Arms, Coppull.

Alison Arms Folk Club proudly presented young and very talented local folk artists at the Unity Club, Standish.  What a wonderful concert!  The musical talent was superb from these young people.  Their vibrancy and enthusiasm during their performances was outstanding.  Thank you to all of them and to the wonderful audience who supported and enjoyed each set.

Pauline Blackburn started the show, performing some of her own songs which were very well received. She is a true entertainer.

Catalanna followed with their wonderful harmony renditions.  They did a superb job of "The Rose".

Franco sang a lively set of sing-along choruses which got the audience participating.

Peter Ord entertained us with his Cumbrian banter and highly entertaining traditional songs.

The Jaywalkers finished the evening with a rousing, musical, bluegrass/folk ensemble.

These young people have proved that folk music is very much alive!  Well done to all of you.

Thanks to Seth who had a busy night sorting the sound, and to the committee who all helped to make the night a success

The evening started off brilliantly with Stringshack opening the Festival.  They attracted a large crowd and gave a very musical and entertaining set.  In fact they get better and better, and we could have listened to them all night.

They were followed by Marie Little who as usual gave a very varied set of songs and poetry and jokes.  Marie battled on as the weather got colder and her fingers were nearly frozen.  She gave 110% and was enjoyed immensely by all.  Mental note, we need to hire a few heaters to warm the marquee next time, even though it is June!!!

As usual, there was a great sing around in the pub to end the night.

We were entertained by the Band of Crooks from the Crook folk club, who attracted a large crowd on Saturday afternoon.  This was their first outing as a group and they did themselves proud producing a good sound and a varied programme.  Well done and thank you Crooks!

Saturday night was the turn of the younger generation, Catallana who entertained us with a wonderful harmony sound and varied song repertoire which just gets better each time they go on stage.  They were ably assisted by Ken and were joined by Jon Brindley towards the end of their set.

Jon Brindley followed the girls with an awe inspiring, energetic performance.  His guitar playing must equal the best in the country.  He also played traditional music on his fiddle and sang many of his own compositions.  He was ably assisted by the legendary Tony Gibbons of Garva fame, on the bouzouki, and at one stage he invited Tony back on stage for a memorable duet.   Jon said that he was honoured to be invited back to his old folk club, and we were delighted that one of the most gifted entertainers in the music industry should grace us with his presence.

This was a truly memorable day which ended with all of us in good spirits after such a wonderful feast of music.

The session in the pub continued well into the morning!

Sunday afternoon was an Open Mike session , ran by Seth, which  was well supported despite the onslaught of the  heavy rain.

However the rain stopped and the final concert got underway with Phil, Ken and Mervyn singing a few songs each.  They are all talented performers in their own right and were well appreciated by the audience.

One Hand Clapping then took over the stage with a lively, non stop set, which had feet tapping, hands clapping, dancing in the aisles and on the tables.  Gerry’s guitar and mouth organ playing were superb.  Tim put so much energy into his songs and the driving bass complemented the fast moving pacy music.  They were exhausted at the end of the long set and we were all on a high because it not only was a brilliant set but a brilliant ending to a very successful Free Music Festival.

Thanks must go to all the team behind the scenes.  Firstly to Seth Holden who was there day and night to manage the sound.  Not only was it a demanding job but a very responsible one because the whole weekend’s music depends on it.  Secondly to Pauline, the Alison Arm’s licensee, and  Steve, her husband, who provided the venue, one of the tents, and food and drink all weekend.  They did a sterling job.  Thanks to Wigan Council for providing the camping area. Thanks to Albert for the posters and publicity, and Maria (helped remotely by Simon from Canada ) for the web site work, and Mervyn and Roger for the raffle prize donations. A special thanks to Ken Scally, who did so much on the musical side to make the weekend a success, both in tireless personal performance, and in assembling the Crook ensemble and coaching and accompanying Catalanna.  Lastly thanks to the Committee – who all worked so hard to make it all happen, especially Kevin Brady, who has donated so much of his time and expertise over the years.  The teamwork and camaraderie and enthusiasm has been wonderful – all with the aim of promoting live folk music and keeping it alive.  They deserved to have a successful weekend, and the smiles on Sunday night showed that it was exactly that. 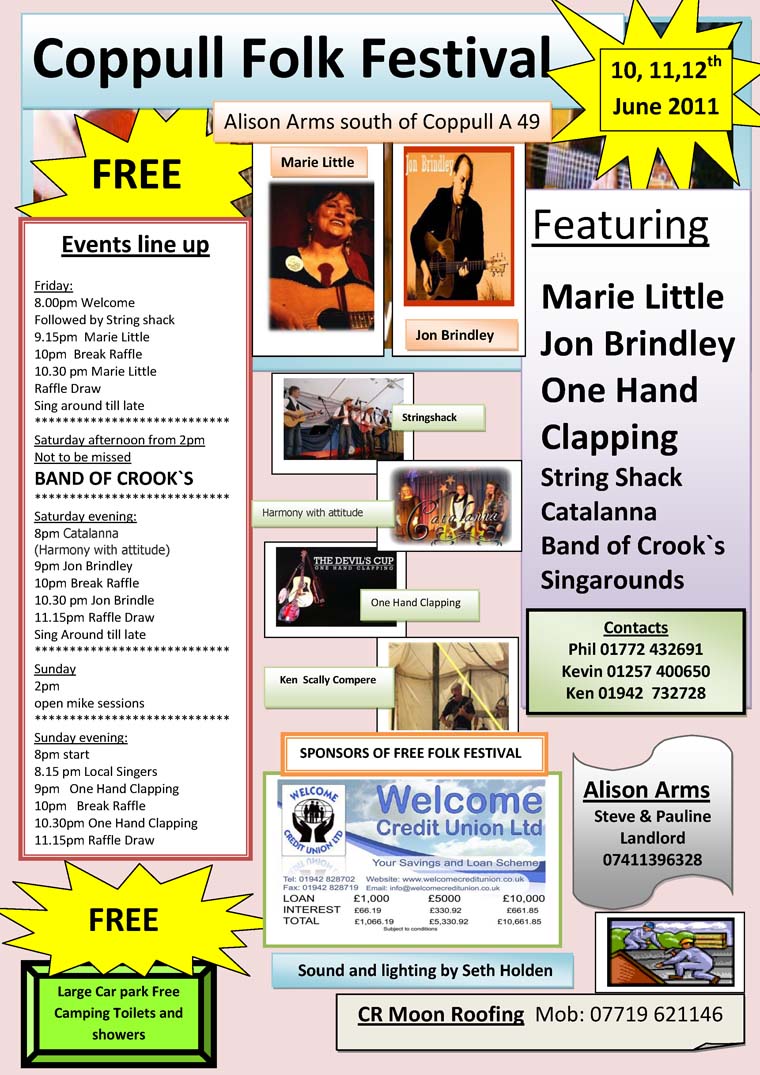 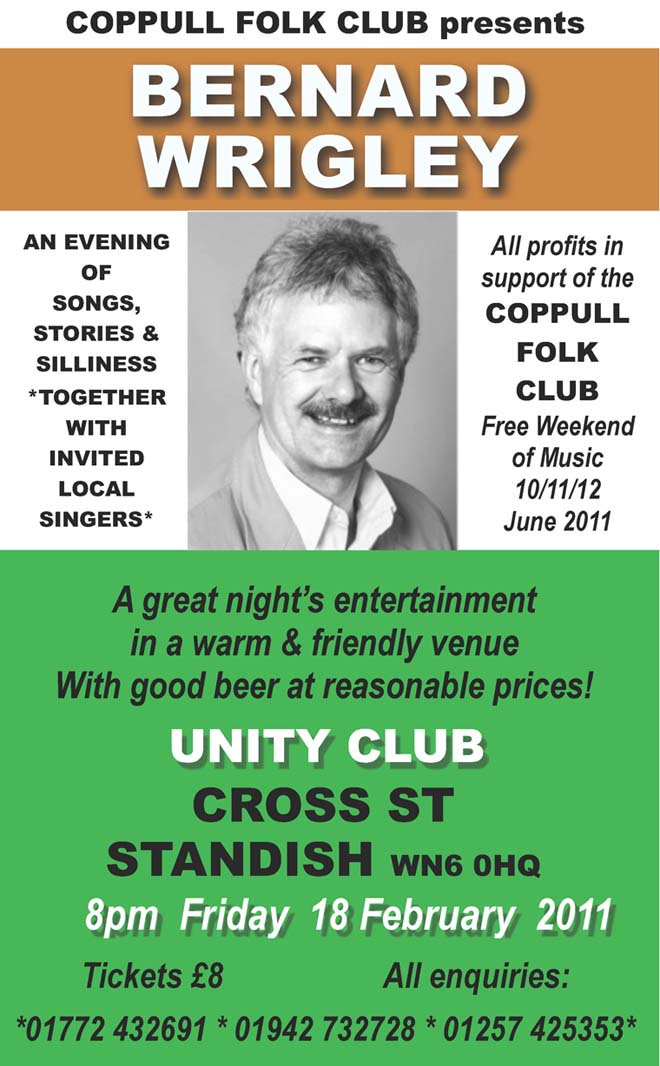 The Fund Raiser concert featuring Gary and Vera Aspey, which was held at the Unity Club, Standish, on 22/10/10, went very well, and a good time was had by all. Special thanks to Seth Holden, for providing, setting up, and running the PA for free. You did a great job Seth, and the sound could not have been better. Also a big thanks to Ken Scally, who single handedly sold half the tickets, and who , alongside of his talented daughters, did most of the warm up entertainment ( and very good they were too )   Thanks also, as ever, to our great friend Joan Blackburn, for stepping in with a borrowed guitar to finish the warm up session with a few beautiful songs, sung in her unique style. And lastly, thanks to the Unity club Management for providing the venue for free, and a great venue it is too - very warm and welcoming, and good beer !  Phil Regan 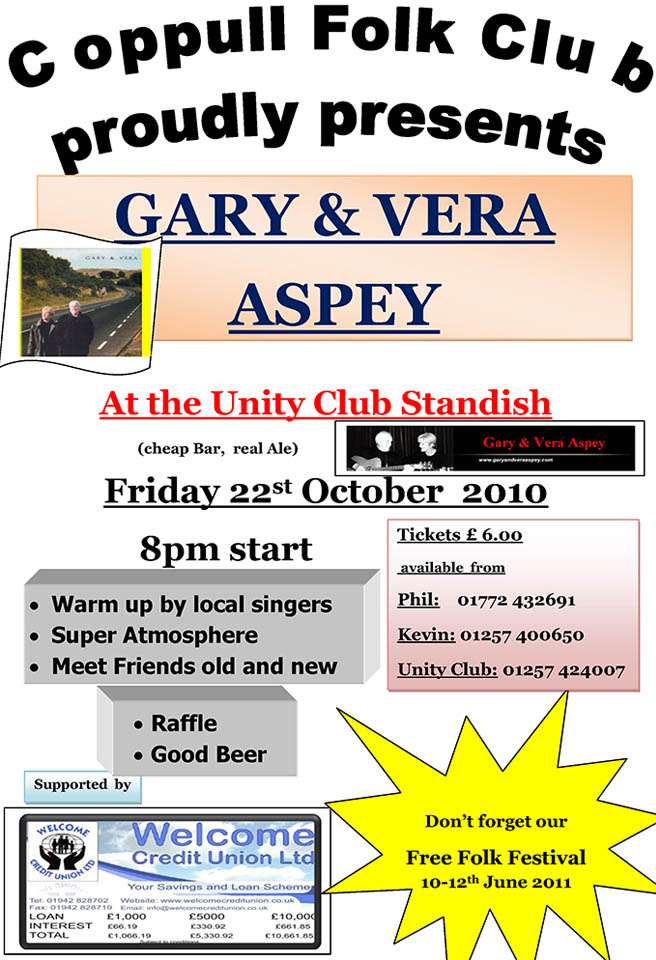