The weather was wet, cold and windy and putting up the tents was not easy.  However the wind and rain got worse and the likelihood of the tent blowing away completely was too real.  The sides of the tent were lifted to ease the pressure of the wind, but the rain blew inside the tent and wet all the chairs and tables.  Would anybody turn up on Friday??

It was still wet and windy but Phil got the big patio heater lit, the audience turned up, and the festival was delcared open.  We had two great music renditions from Mervyn and Ken and that paved the way for Bandersnatch, who wowed the crowds from the word go.  Seven of them played many instruments with consumate skill ( I counted 14 instruments on the stage!)  The great instrumental music was enhanced by wonderful singing both solo and in harmony, and the group had the "tight" sound that reflected their years together (young fiddler apart -a new and extremely talented addition to the group).  We joined  in with some chorus songs helped by songsheets provided by the group.  This involved us, and so Bandersnatch fitted in very well with our philosophy of "promoting live music for everyone".  We watched the tent poles pop out of their sockets in the blustery wind.  We watched the waterfall in waiting building up in a fold in the tent just in front of the stage.   Bill the sound engineer kept checking that the equipment was safe, and Bandersnatch played on and we sang on.  They said that if the foul weather as good enough for the Queen and didn't stop her, then it wouldn't stop us!  And it didn't.   We all enjoyed the music and songs and the wonderful performance of the group.  Thank you Bandersnatch for such a brilliant set.

The afternoon concert  opened with some wonderful performances from the Crooke Folk Club members.  They have always been supportive of the Festival and we were delighted that they could yet again support us with their varied and entertaining  music acts.  They were followed by members of the Fleetwood Folk Club, who again entertained and delighted us with their music renditions.  Catalanna, the young talented female group made an impromptu appearance and were very well received.  Thank you to both clubs and Catalanna for making the afternoon a great success.

By Saturday night, the rain had stopped and the wind had abated.  Turnpike started us off with their lovely lilting sounds of instruments and voice.  They always look relaxed and together, and we always love to listen to their lively banter and entertainment.  They were a complete delight.  Thank you Turnpike for supporting us with a delightful set.

The Jaywalkers tuned up and treated us to a spectacular evening of americana/blues/ bluegrass/folk music.  They were bright and vibrant and performed many highly complicated (and fast!!)  instrumental pieces.   This complicated but delightful music was woven into a background for Jay's wonderful singing.  Individually they are experts at the mandolin, double bass, fiddle and guitar, and their delightful  stage presence and music kept us highly entertained all night.  We were really glad that they were able to make it to our festival, and like last time at the Standish concert, we were blown away by their musicality and the vibrancy of their stage act.  Thank you Jaywalkers.

We actually had some sun on Sunday and the place  warmed up at last!!  The Open Mike Session was very well supported both by stage performers and audience, and lasted 4 hours!   There was a sense of this being the people's festival and so most of the audience got up and contributed their entertainment.  Everybody got involved  and one got the feeling that this is what folk festivals should be about - good music and entertainment, with windows for the audience to be involved.  We all then feel we have done our bit to help to make the festival a success.  Thank you to all who contributed to make the afternoon so memorable.

This act was a pure delight!  With their colourful clothes and weird instruments (including electronic ukeleles and a stylophone!), we were all blown away with their cheerful musical and poetic delivery of local encounters, done in the Wigan dialect.  The home made bass complete with a rope and colourful soapbox, complimented the miniature drum set with many extra percussion instruments attached.  Their sounds were so different, their songs/poems were so original, their delivery was so funny that they added a complete new fresh dimension to the weekend.  Thank you for a wonderful set.

Jon once again displayed his musical and singing talents ably assisted from time to time by Tony Gibbons  (ex of Garva).  This man is a group in himself.  He started off with his own songs accompanied  by some wonderful guitar virtuosos.  He then moved on to the electric piano and demonstrated that he was also an  expert at playing this instrument whilst singing.  We were then treated to some  brilliant fiddle tunes both Canadian and Irish with Tony's expert accompaniments.  At the same time, Jon's communication with the audience kept us all laughing.  We joined in when we could with Jon's original versions of well known chorus songs.  Jon is so talented and produces a sort of magic when he is performing.  He was a super act to end a wonderful festival.  Thank you Jon.

Thank you to Mavis, the Landlady of the Alison Arms who worked so hard over the weekend to keep the beverages flowing and allowing us to use the pub for the many sing arounds - especially late into the night!

Thanks to Ken Staveley and Son for the loan of the pallets and sheets for the stage, and for kindly transporting them out and back.

Particular thanks to Bill and Lesley of Westminister Stage Engineering, based in Leyland, who provided such a wonderful crystal clear sound.  Bill was consistently complimented by all the participating acts, and was right on top of the game,  responding instantly to the requests of the artists.  We recommend them highly to anyone needing any size of sound system at an affordable price.  Bill stepped in at the last minute to replace Seth, our usual sound engineer.  We wish Seth a  speedy recovery from his illness and look forward to his return to the Coppull Team.

And lastly ,thanks to the Coppull Folk Club Team, who struggled with tents in the rain, built stages, booked acts, performed at open mikes and pub singarounds, created and printed posters, organised raffles, updated web sites, cut grass for campers, cleaned camp site toilets and showers, carried chairs, contributed raffle prizes, I could go on all night. I won't list you all, but you know who you are. Without all your efforts throughout the past year, this excellent weekend of music would not have happened.  Lastly, thanks to all of you who braved the elements, to attend.  We hope you enjoyed the weekend as much as we did. 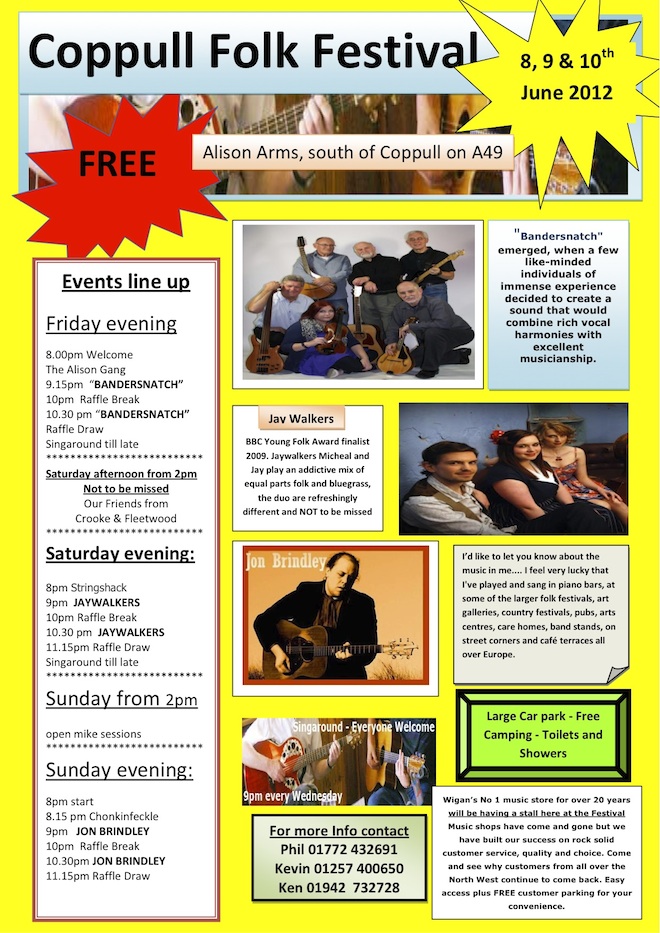